Several weeks ago, there was a horrific slaughter by a Muslim extremist who planned for a year and then rented the largest truck he could and evilly plowed through a large crowd of families with children and babies, couples, elderly grandparents, friends, tourists and visitors out to celebrate the holiday, fireworks, music and life.

Before the fireworks, a band was playing and a couple danced together 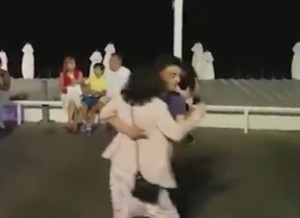 and enjoyed the music (Yea, France ! – when I read the article, I checked the video to see if one of the dancers was a friend). If I ever had to go “out” in that type of situation, dancing with a wonderful partner is not a bad option  (I’d try to get her out of the way first).

Two individuals made heroic attempts to thwart the madman. A motorcyclist bravely tried to stop the driver seated above him in the moving cab, but ended up under the truck wheels. A second man jumped into the cab window when the truck was slowed by some obstacles and fought the driver and kept him occupied until the gendarmes arrived and shot the driver. In his wake, the truck driver intentionally killed 84 strangers – men, women and children and injured a hundred more. This was a sad, senseless act.

Down south, we have invasive critters called fire ants. A single ant bite will get your immediate attention. Their survival strategy is, upon disturbance of the mound, ALL the ants come streaming out to attack and bite the fire out of the intruder. Their lesson is so effective, you quickly learn to pay attention to where you ( your friends, small children, pets) are standing or sitting outside.  When situations like Nice or the Pulse nightclub occur, we should adopt the same strategy – everyone goes after the destroyer – regardless.