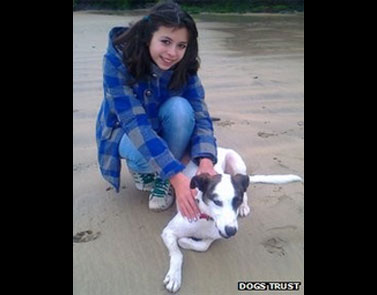 A year ago, 13 year old Annie saw five week old Blitzen at the National Animal Welfare Trust shelter in Cornwall, England and fell in love with him. She asked her parents if they could take him home, and the family decided to adopt him.  A year later,  about 4:00 PM in the cold winter afternoon, Annie said goodbye to her mom and took Blitzen out for their regular afternoon walk. An hour passed and Annie had not returned home.  When it got dark and Annie and Blitzen had not yer returned home, her mother got concerned and call the Cornwall police who assembled and sent out a search and rescue team.  With the sun down, the temperature had dropped furthere and become extremely cold. There now was great concern about Annie getting hypothermia.

The darkness made the search more difficult for the team. Slowly, the hours passed, 7 o’clock, 8 o’clock then 9 and the search team kept looking. They were starting to feel the cold, but they kept looking. 10 o’clock, then eleven, the team the team searched with their flashlights to woods, bushes, ravines searching for Annie.  Around midnight, a team member saw the light from his flashlight reflected in two animal eyes. He went closer to investigate – the eyes were Blitzen;s eyes. He called out to his teammates and they converged towards the dog and saw him curled around Annie as he tried to keep her warm.  As they got closer, Blitzen rose up, left Annie  and placed himself between Annie and the strangers to protect her.  The search team members were able to convince Blitzen that they were not going to hurt Annie. Only then did he let them to proceed. Blizten returned back to Annie and laid down next to her again. The team members saw an injury on Annies head – apparently she had slipped, fallen and hit her head knocking  her unconscious. Blitzen had stayed by her side for those many hours keeping her warm and protecting her until she was rescued.  Annie was carried to the road where an ambulance picked her up and took her to the hospital where she stayed for two days making a full recovery.

We don’t know exactly what time Annie fell, but if Blitzen hadn’t stayed with her and kept her warm she could have died from hypothermia”.  His “determination to stay by her side undoubtedly saved our daughter’s life”. “We saved him and then he saved Annie…He’s a “fantastic dog”.