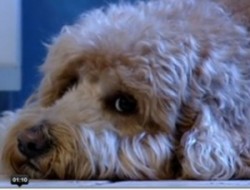 At the tender age of 17 months, Ben Ownby was diagnosed with type 1 diabetes which can become deadly, so, it has to be monitored hourly. It is important if the sugar is either too low or too high. Ben had to receive seven or eight shots of insulin a day to survive, and he still had seizures.

As Ben was growing up, a cute brown Labridoodle named Dakota, was being trained as a guide dog by the Guide Dogs of Texas in San Antonio. He didn’t, however, pass the demanding final requirements, but with his good scenting ability, personality and temperment, Dakota was retrained for months to detect glucose levels and became a scenting, diabetes alert dog. Dogs have over 200 million scent receptors in their noses compared to a human’s five million. “When blood sugars begin to fluctuate, the human body releases chemicals that change the body’s smell”. It’s unnoticeable to the human nose, but to a trained dog, “it’s an alarm.”

Dakota became Ben’s dog three years ago. They’ve been inseparable since then.  “He can tell my blood sugar by the scent of my breath”. If the blood sugar is too low, Dakota will jump up on Ben. If it’s too high, he’ll nibble on Ben’s wrist band to signal that Ben needs to use a traditional machine to measure his blood sugar levels.

Ben woke up in the middle of the night and found Dakota standing on him and looking down at him. Ben got up and tested his blood levels and found it was low. “He’s usually very accurate.”
Dogs “can actually detect a rise or a fall up to an hour before you know it or your meter would catch it” said Cherry Campbell, with non-profit Warren Retrievers in Virginia.

Dakota even helps Ben’s classmate. “He’s come next to me to signal that I need to check my blood sugar” said a class member. “I have been low.”

Ben’s father, Bob, said that “it was love at first sight.” Dakota helps us with the “safety of our son” and provides us “a sense of security”.

“There’s an undeniable love and bond between Ben and Dakota – a friend and a partner, who may one day save Ben’s life”